News and Notes from the Director

When the Glenwood Springs Community Center Ice Rink opened in western Colorado in 2001, it was a huge boost to the hockey community.

TK Kwiatkowski came on board the first year to help coach with the Glenwood Springs Youth Hockey Association (GSYHA) and Grizzly Hockey.

“There was a need of coaches in the area at the time,” Kwiatkowski said. “[It was like] ‘Field of Dreams:’ if you build it, they will come.”

The association started out with about 50 members and six to eight coaches. By 2007, that number jumped to 80 kids. Currently, the GSYHA averages 175 skaters per year.

Kwiatkowski, 47, is really proud the association has grown so rapidly over the past decade.

“I think we’ve created a really good culture with our Grizzly Hockey program,” Kwiatkowski said. “Not only winning and losing, but creating good individuals.

“Hockey teaches a lot of life lessons, just throughout the game, winning and losing and teamwork and sportsmanship. I get people moving into our community from outside the area and when they meet me they say, ‘The people I’ve talked to, they say you need to go play Grizzly Hockey, it’s really good.’ That makes me proud.”

Located in the heart of the Roaring Fork Valley, Glenwood Springs isn’t predominantly a hockey community. Skiing-rich towns Vail and Aspen are less than an hour drive away, so Glenwood Springs is more of a tourist area. That presents challenges others may not face in building a successful hockey association and attracting young players to the sport.

“There’s always competition with the other winter activities,” Kwiatkowski said. “Has it been a challenge? You see some competition, but we’re a rec program and we know where we’re at.”

Kwiatkowski brought an extensive hockey background to Colorado when he moved to the state in 1993. He grew up in Minnesota’s Iron Range and played four years at Hermantown High School outside Duluth. He then skated a couple years at Mesabi Community College before a short stint at the University of Minnesota Duluth.

Kwiatkowski coached in Aspen, Colorado, from 1996-2001 before the Glenwood Springs Community Center Ice Rink was built. Moving to the GSYHA, he headed up the 8U and 10U programs from 2001-05, and was the volunteer coaching coordinator for his final three years.

When Kwiatkowski stepped in his director of hockey position in 2007, his vision, along with co-director Jon Thompson, was for the program to be able to field two travel teams at each age level.

“The one concern we had is having the one age level, 15 kids say at the 10U, 12U or 14U level, you had your large spectrum of players,” Kwiatkowski said. “You had your strong A players and you had your house players at the bottom all playing on the same team. To be able to grow the association to be able to have at least two maybe three teams each age level was one of our goals.”

It took just a few years to attain that goal, and the growth hasn’t stopped since.

“We had to work pretty heavy with the city of Glenwood Springs,” Kwiatkowski said. “It’s a community center and a city-run rink and we had to establish relations with them to get the necessary ice time to have that many players in the association.

“The other side of it was educating the parents into morning practices, because we had to figure out another way to get at least a third practice because not every age group could have that 6-7 o’clock ice time three times a week. That was education on the parents’ side and it worked out fine. I think the parents accepted it and enjoy it now.”

The Glenwood Springs Community Center Ice Rink is seasonal, running November to mid-March. One major drawback for the GSYHA is the rink has just one sheet of ice. A big long-term goal of the association is to add a second sheet.

“With the growth of our organization, I don’t know how to get more kids on the ice,” Kwiatkowski said. “We literally have 50 10U kids on the ice on Wednesdays, and that’s a packed ice sheet. Some of those kids, that’s their only practice, some of the house kids. We’re really focusing on getting a second sheet of ice.”

Kwiatkowski is networking with city council members, trying to get the mayor involved and educate the public to try and make the second sheet of ice happen. He knows the project will take time, but he plans to keep working hard to make the dream a reality.

Kwiatkowski is a hands-on director of hockey who enjoys getting on the ice to help youth players and his coaches. With 40 coaches in the program — there were about a dozen when he took over a decade ago — Kwiatkowski wants to make sure his coaches are all in sync with what’s being taught, especially when it comes to following USA Hockey’s American Development Model. 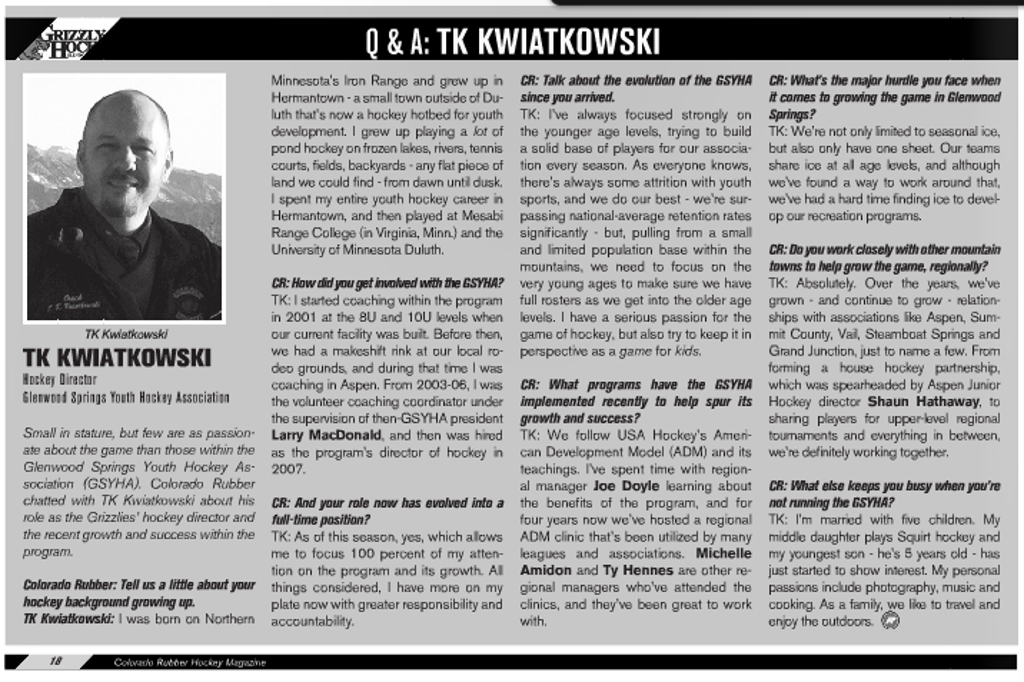 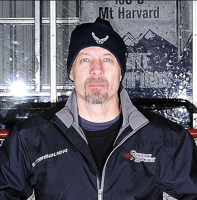 Some information about our Executive Director, T.K. Kwiatkowski: